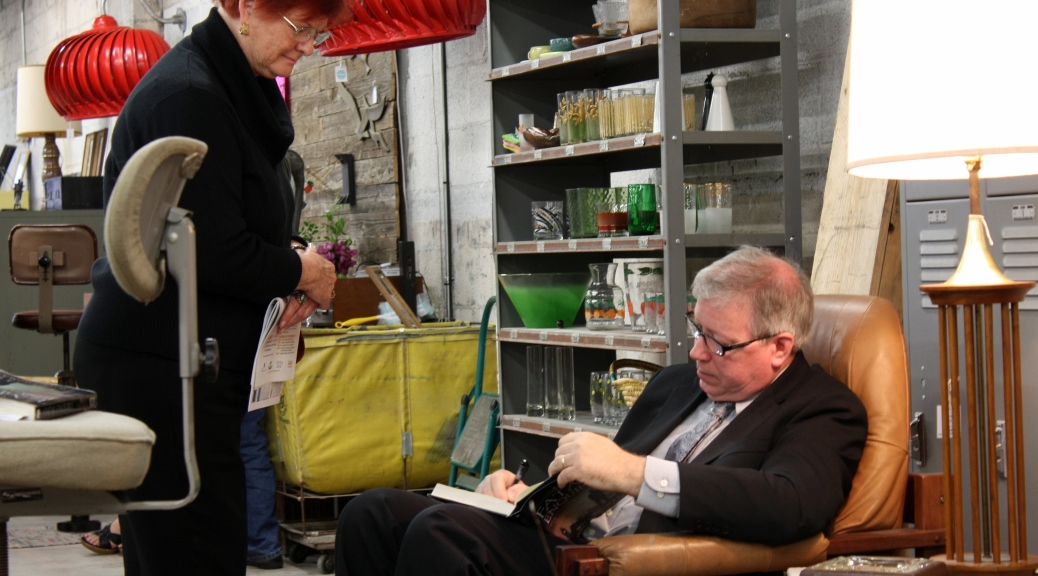 A couple Wednesdays ago, the day seemed normal enough. I woke, messed about with e-mail and Facebook and the daily news, then settled down to the business of writing and research.

And then the mail came, and with the junk mail and coupons was a package. Inside that package was a book I’d pre-ordered in September last year. And forgotten.

I’ve been a huge fan of Will Thomas‘s Barker & Llewellyn series since reading Some Danger Involved. I picked up the paperback, riffled through the pages, read the back copy. A mystery set in Victorian London, with interesting characters and solid writing, something that looked like the work of a Holmes and Watson fan, but was it’s own thing? Yeah, sure, I’d give it try.

Glad I did. The detective–ahem, pardon me, the enquiry agent–is somewhat Holmesian, and yet Barker is vastly different. He wears tinted glasses at all times, is particular about his green tea, has a Pug for a pet, and frequents a sketchy underground eating establishment. The occupants of his household and those who operate on the fringes of society are equally intriguing and amusing.

Thomas lets the stories play out against the backdrop of actual historical events, weaving issues of the day into the plots, and letting real historical figures wander about the scenery and interact with the characters. While each book revolves around its own mystery, there’s also an overarching mystery involving Barker’s past. His fellow agent is young, likable, romantic Llewellyn, quickly learning the trade and getting into this fix or that. It is by him we are led through much of each story.

About that long-ordered-but-forgotten book? Fatal Enquiry, the latest in the series.

It arrived one day after the official publication date, and on the same day as the first book signing.

A mere two hours away.

A favorite author, a brand new book–how could I not go?

But I was also low on cash, low on fuel, and had a writing deadline in view.

The weather was beautiful, the traffic scarce, and as I am wont to do while traveling, I held my camera up to the windows and took random shots of buildings, card, clouds, whatever struck my fancy. Most of those photos didn’t turn out, of course, but some were better than expected. It’s a weird bent, perhaps, but it’s my way of recording a journey.

The directions were a bit wonky at the end, so rather than being a few minutes early for the signing, I arrived several minutes late. The talk was well underway. Argh. Still, I was able to listen to the bulk of it and learn interesting trivia, such as the fact that Thomas’s research into archaic fighting methods led to the compiling of a manual on the subject and to the creation of new martial arts clubs around the world. All because he asked a question for a novel. (Read more about the author here.)

Thomas read a selection from the new novel, then the actual signing began.

It was the most low-key yet intensely interesting book signing I’ve attended. Some have been rah-rah rallies, some have been an author sitting at a table. This one? Not only was the audience educated, fun was had by all.

If you have not discovered this mystery series, please do give it a try. Click on the book titles in the list to read excerpts of each:
Some Danger Involved
To Kingdom Come
The Limehouse Text
The Hellfire Conspiracy
The Black Hand
Fatal Enquiry

I have not yet been able to read my copy of Fatal Enquiry due to an unexpected change of schedule taking me out of state, but I hope to remedy that in the coming week or two. Meantime, below are a few shots I took while at the signing, which was held at Retro Den, a nifty shop specializing in all things yesteryear.