Donovan M. Neal, a blogger and the author of the Biblical fantasy series The Third Heaven, recently interviewed one of our authors, Keanan Brand, about his journey toward publication, the challenges in writing and in life, and how his faith informs his writing.

Below are a couple excerpts:

What advice would you give new novelists?

I lifted that line from the old Kung Fu television show, but it’s a solid Biblical and literary concept, too. Patience isn’t staying still, necessarily. It’s persevering, it’s trying again, until the goal is achieved.

What were the challenges (research, literary, psychological, and logistical) in bringing it to life?

The adage about having to write a million words before being able to call oneself a writer? I don’t know how many words I’ve written in my lifetime, but I produced at least the equivalent of three copies of Dragon’s Rook before finally settling on a completed version that worked…

I am pleased with the end result, and early readers have said that portions of it stay with them, coming to mind long after they closed the book, and some have said it is far different from what they expected of a swords-and-dragons yarn. One reader (who had never read fantasy) said she couldn’t put it down. I hope that you, too, enjoy this tale. 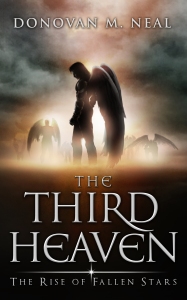 This is only a fraction of the interview — read it here in its entirety. (Read more about Keanan here and here.)

We thank Donovan M. Neal for his generosity.

Coming soon: A review of The Rise of Fallen Stars, the first book in Neal’s The Third Heaven series.