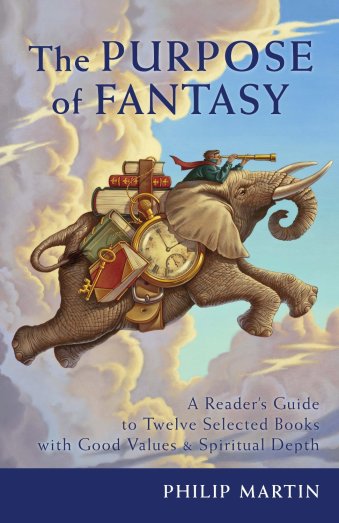 This is a good book.

I could end my review right there and still have told the complete truth, but that wouldn’t tell you why or what, or how you can acquire your own copy of this useful, soon-to-be essential, little volume.

The WHAT and the WHO: The Purpose of Fantasy: A Reader’s Guide to Twelve Selected Books with Good Values & Spiritual Depth by Philip Martin. I met Phil many years ago at a writing conference in Oklahoma City, back when he still worked as the acquisitions editor for The Writer Books. He’d recently published the first edition of A Guide to Fantasy Literature (now revised and with a new cover, although I much prefer the dragon on my copy!). Since then, he has formed his own publishing house, as well as offering consulting and mentoring services for fellow writers.

As a writer of fantasy and science fiction, I have defended my chosen genres to writers who deem them lower forms of literature, as pop-lit or pulp fiction. (Well, I ask, doesn’t the “pop” in pop-lit mean the form is popular? There must be a reason for that.) Fantasy has been and will always be a viable and powerful literary form, and Philip Martin is its apologist:

Fantasy is different from other types of fiction. It is a wonderful approach to storytelling, and “wonderful” here means literally full of wonder. Unfortunately, it is often used in a very small-minded sense to segregate off a small type of adventure fantasy into a sub-genre, a ghetto of bookstores and libraries, where you mostly find books with sword-wielding barbarians, bushy-eyebrowed wizards wearing star-studded gowns, Arthurian knights galloping across medieval countrysides, perhaps a castle in the background, perhaps a scaly dragon sailing overhead, perhaps a warty, axe-wielding ogre lurking in the shrubbery. But fantasy is far more than this. Fantasy combines wonder and whimsy with a richly non-rational, spiritual, philosophical look at matters such as good and evil…Someone said that the difficult thing about fiction is that it has to make sense. Fantasy makes sense, but it doesn’t show us reality. It shows us an inner truth, without any need to be any more real than an occasionally invisible hobbit with hairy toes. (Kindle locations 134-150) (emphasis mine)

Martin goes on to say, “At their core, fantasy stories are about what we believe about some matter of spiritual beliefs; they tackle core issues of good and evil, and how we should deal with it all” (Kindle locations 155-156).

But this is not a religious book, nor is it a book of faith, but a discussion of how the spiritual is illustrated by and becomes accessible because of fantasy literature.

His three criteria for choosing the twelve books included in The Purpose of Fantasy:

As a result, and without prior design, most of the books that made the cut are generally marketed to children.

C.S. Lewis wrote: “When I became a man, I put away childish things, including the fear of childishness and the desire to be very grown up.” Albert Einstein said, “If you want your children to be intelligent, read them fairy tales. If you want them to be more intelligent, read them more fairy tales.” (This may apply to adults as well.) What is clear is that the foundations of a person’s moral character are strongly shaped by influences and lessons absorbed in childhood. And the two things that fantasy is most about – imagination and issues of right/ wrong – are naturally in rich abundance in children’s books and stories. (Kindle locations 234-240)

However, the questions raised and the themes throughout are decidedly the realm of adults.

Some writers of fantasy have been quite annoyed to see their stories labeled as “for children.” These authors included the great fabulist Hans Christian Andersen, who insisted “my tales were just as much for older people as for children, who only understood the outer trappings and did not comprehend and take in the whole work until they were mature.” (Kindle locations 274-276)

Again, the WHAT (the books Martin discusses in The Purpose of Fantasy):

Momo by Michael Ende
Tuck Everlasting by Natalie Babbitt
The Little Prince by Antoine de Saint-Exupéry
The Silver Chair by C.S. Lewis
Finn Family Moomintroll by Tove Jansson
The Rope Trick by Lloyd Alexander
Gifts by Ursula K. Le Guin
The Last Unicorn by Peter S. Beagle
The Wind in the Willows by Kenneth Grahame
Charlotte’s Web by E.B. White
The Ocean at the End of the Lane by Neil Gaiman
The 13 Clocks by James Thurber

Reading this book was a joy. It reacquainted me with beloved books I haven’t read since childhood, and nudged me to become friends with books that have long been on my “to read” list. (I first learned of Momo from a popular South Korean television series, My Lovely Sam Soon, aka My Name is Kim Sam-Soon, and have been wanting to read it ever since.)

For me, there is a danger in reading interesting books that are also well-written. When I find something I like, something that speaks to me or draws me in, I will blitz through it. I skip across the water rather than immersing in it. This time, however, I read slowly, as Martin recommends we do when perusing the stories he suggests. Savor them, ponder them, ask their questions of ourselves. Feel the wonder.

Fantasy’s gift is to allow us to see our own world in a state of surprise and grace. (Kindle locations 475-476)

Or, as Antoine de Saint-Exupéry writes in The Little Prince,

“It is only with the heart that one can see rightly; what is essential is invisible to the eye.”

But fantasy is more than the fantastic or the spiritual. In the chapter titled “Is Fantasy Subversive?”, Martin opens with this statement:

Some authors have seen fantasy as a good way to introduce a type of creative questioning, one that can shake up, or sneak by, a conventional perception. (Kindle locations 492-493)

And bolsters it with this:

Ursula Le Guin wrote that some adults are uneasy with fantasy’s inconvenient tendency to reveal truths – to tell stories in which emperors have no clothes. (Kindle locations 504-505)

I grew up in a strict church that, despite its words, seemed more concerned with appearances than with truth, and eschewed obvious sins while indulging in the more subtle, more insidious sin of pride. I was that kid who stirred up controversy by pointing out what was, to me, as plain as sunshine: There’s something wrong. There’s a disconnect between what they said they believed and how they behaved.

One of the teachings declared that most fiction was useless and even sinful, because it was lies. However, as a voracious reader, I consumed fantasy, science fiction, historical fiction, mysteries, fairy tales, folklore, and the like, as well as the many stories in the Bible, and gained much from them all. In a Native American folktale, I might learn about wise choices, which backed up a concept I might have learned in Sunday School or heard preached from the pulpit. In an African fable, the evil of lying might be reinforced.

Do stories question authority? How often, for instance, do stories and books for young readers contain dunder-headed or threatening adults? Does that mean that those stories are anti-adult? More accurately, they encourage young readers to think twice, and compare what they see in real life to those fictional tales. (Kindle locations 576-578)

It’s not important which church I grew up in, or what I observed. It’s important that I read widely and asked the questions. Eventually, I came to see value in much of what I was taught, because it was true and solid and a good guide for life. However, there is also much I abandoned as untrue and harmful.

For a time when I was in elementary school and junior high, there was a fear among the adults who knew me that I would mix up reality and fantasy, that the fiction that so enthused me would overtake my reason or my faith. When I wearied of defending myself and the books, I hid them behind more acceptable volumes, read them under the covers, sat in secluded corners.

The key to opening the mind is to be able to imagine something else, to ask “what if.” But “what if” does not answer questions. It simply creates a portal, an opening to build the structure of a story on top of those questions…Minds of young readers are not so malleable or gullible that they swallow everything they read or are told…Fantasy stories raise the question of Truth. But they don’t create it, and readers know that, because the worlds of fantasy are so clearly invented. Even more so than all the other branches of fiction, they are impossible worlds. (Kindle Locations 587-603) (emphasis mine)

It seems I cannot write a book review without applying it to my own life. That’s a good thing, perhaps, because it shows how well the book relates to me. Is it true? Interesting? Vital? Engaging? Well-written? The Purpose of Fantasy is all those and more. I recommend this book to writers and readers everywhere, especially those who see the wonder beyond the skin of the world.

The solution, in a fantasy book, often comes from the smallest one who asks the biggest questions. (Kindle locations 608-609)

In addition to being an excellent and engaging writer, Martin is also an editor, mentor, and publisher. He’s the founder of Great Lakes Literary and its two imprints, Crickhollow Books and Crispin Books. Martin is blogging about the books he explores in The Purpose of Fantasy ( Mary Poppins, for instance), and readers are invited to join the conversation. Readers can also visit the Crickhollow Books page on Facebook.

One last note: Check out that awesome cover art! It’s called “Looking for a Good Book” and is by Greg Newbold. You can check out more of his work on his site.

2 thoughts on “The Purpose of Fantasy”